Visit to Amuka and the Making of Kaddish

Amuka, in northern Israel, is the gravesite of Rabbi Yonathan ben Uziel, one of the greatest students of Rabbi Hillel from 2000 years ago. I was there with three friends. An Ashkenazi, an Ethiopian, and Pincus, dressed in a dusty, black coat and kippah, covered with soot from head to foot and wreaking of pure kindness. He was a total tzaddik, or holy man, reminding me of Eliyahu ha Navi, the angel and prophet, frequently disguised as a beggar.

Except for us, the place was completely deserted. It was dusk, time for arvit or mincha, evening prayers, and my companions complained about being short six men for a minyan. We were only four and ten is the necessary quorum in our tradition. Pincus leapt upon a rock and began, “If you have faith, then we will have our minyan!” he exclaimed. "Emunah!" he cried. I looked up at the road leading to Amuka and saw a desolate site among the trees. There was nothing… nothing, only trees. Where this minyan was going to appear from was certainly a mystery to me. We went inside the small building there in the wilderness, which housed the tomb of the great sage and began our prayers.
Somewhere in the middle of what we were doing, I heard a noise outside and poked my head out the door. I saw a car gradually winding its way down the hill through the trees. When it got to the parking lot, completely empty except for our car of course, the doors opened and one by one, six guys piled out and headed our way. We were four, combined with their six, there was our minyan!
Pincus lost all control. He started jumping up and down and dancing, singing. He was the happiest man on the planet. “See? I told you to have faith!” Moments later, another car appeared with more men. And then another. Lots of minyans. In fact, by the end of all this, three busloads had shown up, full of people visiting Amuka, the women lighting candles, so many that it turned into a bonfire. 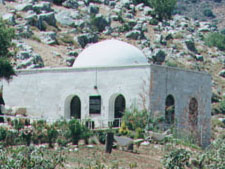 The acoustics sounded so good in that little stone building that I whipped out my trusty recorder and got the Ethiopian guy reciting Kaddish. It turned out to be the first of many sound samples I was to use in the track I ultimately called Kaddish. Eventually I was to gather many other samples of this prayer but this was the first and would be followed by Hungarians, Moroccans, Persians, Yemenites, the Sephardim from the Abu Hav synagogue in Tzfat, all recorded over a two-year period. Miraculously, when I assembled the recorded samples I was to use in the song, they were all in the same key, only one of them being off by mere semitones! What are the chances of that?

I spent a month in the studio, putting all the pieces together and adding caxixi (basket shaker), balalaika, beats, and more percussion from Tim Bolling. 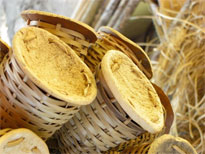 Kaddish is on the "Change The World With A Sound" album and is still one of my favorites. Listen to it here.
Posted by RebbeSoul at 12:45 PM